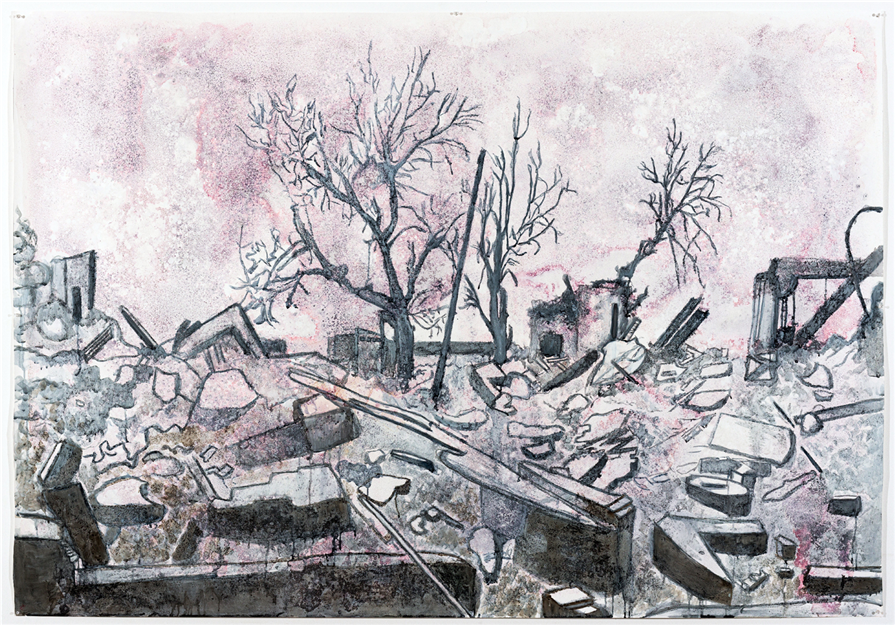 Hamzianpour & Kia is delighted to present new works by Galia Linn, marking both the first time a non-Iranian artist is featured in the gallery, and the debut of a new body of work by the Los Angeles-based artist. Known for clay and ceramic installations, mixed media environments and performative collaborations, Linn creates spaces to process traumas, to exorcize deep wounds by giving them space and presence. In her new series Mai 49, Linn brings her sculptural sensibility to two-dimensional works: watercolors paintings textured with salt that are as monumental as they are personal, intimate, and inviting.

The paintings capture sites of devastation and the aftermath of war, revealed through the intertwined layers of ink, paint, and salt. There is movement on the paper, a sense of momentum in the open skies and backgrounds, that is met with ruins and wreckage. The paintings navigate loss and remains, while the unexpected impact of the salt on the color also suggests the possibility to find relief in this condition of unraveling.

Mai 49 began when Linn found photographs taken by her father-in-law, Arie (Leo) Noy, in Israel during May 1949. The title of the series comes from a handwritten annotation on the photographs, dating them to “Mai ’49.” Over the course of the spring and summer of that year, Noy documented several bombing sites, mostly in Tel Aviv—a densely populated city that suffered air strikes by the Egyptian Air Force. These photographs of destruction were produced following Israel’s Independence War (1947-1949), and yet, the architectural ruins depicted in the images bring to mind other sites of human-made destruction. The discovery of the photographs then led Linn to explore shared memories: of pain and obliteration, but also of beauty and hope. “An incredible storyteller, Galia is influenced by her surroundings and she translates personal experience using fascinating techniques,” said gallery owner Narges Hamzianpour. “The universal quality of her work is compelling and touches upon shared experiences of loss and our desire to be healed.”

Realizing that clay felt too constricting and heavy to reflect the emotional experience depicted in the photographs, Linn began experimenting with the presence of watercolors, as they flow over the plastic surface of Yupo paper, producing an ephemeral, dream-like quality. The watercolors allowed the work to navigate contrasts: of heaviness and lightness, of presence and absence, of pain and relief. The watercolors are then further impacted and textured by the incorporation of various types of salt: Kosher salt, sea salt, and table salt. Varying in sizes and consistency when spread on paper, the salts soak the paint and create dramatic marks. The use of salt also heightens the sense of performative ritual surrounding the work: the salt that falls off the painting salts the earth, the salt that stays on the painting then becomes salt of the earth.

“I am an immigrant who escaped a war-torn landscape,” Linn explains. “The work is a delicate balance between the capacity of the materials I use and taking the materials to their point of rupture.” Reflecting Linn’s ongoing interest in ancient and contemporary relics, in imperfections that unearth elemental tensions, these works

reveal traumas experienced through the body, senses and inherited memories, seeking to embody and then release them.

Linn’s father-in-law and his family escaped the horrors of the Holocaust and were allowed to emigrate to Palestine because they had a woodworking shop in Berlin. The British Empire deemed them “useful,” so they could gain entry to the only place where they could find refuge. The lens through which the architectural landscapes were photographed is informed by those layers of loss, by a worldview shaped by the constant need to find a refuge. Linn’s work then extends these views from beyond the concrete landscapes, to capture how traumas of devastation take a hold of our senses and need to be let go.

Galia Linn is a sculptor, painter, and site-responsive installation artist living and working in Los Angeles. She has shown nationally and internationally, and her work is included in numerous private collections in Los Angeles, Miami, New York, Paris, Brussels, and Tel Aviv. Her work has been featured in LA Weekly, KCET Artbound, Art + Cake, and KCRW’s Art Talk. In Los Angeles she is represented by Track 16 Gallery. In addition to her prolific studio practice, Linn is the founder of Blue Roof Studios (BRS), a multidisciplinary art hub located in South Los Angeles. She also founded Arts at Blue Roof, a 501(c)(3) non-profit organization. Through studio residencies, mentorship, and public programs, AaBR seeks to build long-term relationships with artists and audiences to support accessible arts programs and meaningful arts experiences.